The workshow will be part of Midterm Conference of the RN09 – Economic Sociology –– Categories, Transformations and Exchanges

[Conference date to be announced],  Warsaw

New economic sociology, as analytical undertaking and theoretical effort, addresses phenomena that inevitably touch a normative nerve. Inequality, crisis, accumulation, surveillance, solidarity – to name just a few instances – are all complex realities of the dynamics of capitalism which trigger normative and moral stands. In a similar vein, new economic sociology, as research agenda, is linked with social processes that by their very nature incorporate normative and evaluative dimensions.  Sharing economic forms, alternatives to capitalism, social movements, information technologies are arguably the most obvious instances of what may be termed as taken over and assumed normativity and morality of new economic sociology.

This raises questions about the role of new economic sociology as support and voice of thoughts, concerns and measurements of how economic life looks and how it should look like.  Does economic sociology come with a normative luggage included? How open is the discipline about the normative and moral challenges it brings? Is there a methodology, check and balances, meant to exercise a kind of control and quality of this normative tone? Or everything is rather implicit and taken for granted?

In the 2020 edition of the workshops on new economic sociology hosted in Warsaw, we aim to render the normative component of new economic sociology more explicit, and to examine its logic. Is normativity and morality a trigger for inquiries in new economic sociology, a result of its urge to understand problems and to emancipate the economic and social life? Or merely a convenient and contingent addition, a story that this embraces due to narrative mimetism under the influence of the processes it researches.

Be it as it may be, to advance the discussion about the normative and moral stands in new economic sociology it important also with regard to the mechanisms of projectivity that this disciplines entertains. New economic sociology is not a quiet and self-sufficiently descriptive discipline. But rather an explorative undertaking that engages in contestations, moves boundaries of ignorance, asks uncomfortable questions and unbalances our imaginaries. This is all socially important, and also serves the purpose of promoting the discipline. Yet it is relevant for us to understand that there are some patterns in the manner in which economic sociology projects its research sites and the possibility of change in contemporary society. The capitalist dynamics and the antifragility of capitalism – to use Nassim Nicholas Taleb’s term – are, for instance, such normatively loaded themes of research that economic sociology puts under evaluation while concomitantly projecting and reproducing as myths. 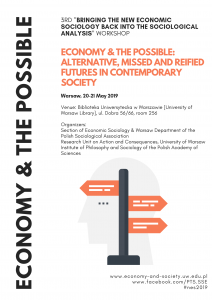 Call for Papers: The Handbook of Failure

CfP: Handbook of Failure: Perspectives from Sociology and Other Social Sciences